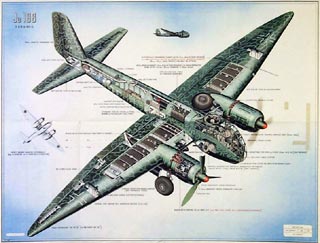 This air diagram shows several elements of the Ju 188.

Essentially a stop-gap development of the Ju 88, the Junkers Ju 188 was a four-seat medium bomber which featured a redesigned nose, larger wings with pointed tips, a new tail unit, more powerful engines and a streamlined dorsal turret. These modifications made it marginally faster than its predecessor and enhanced its high-altitude performance. However, its weak defensive armament and small internal bomb bays remained a problem.

The type first flew in the spring of 1942 but production remained small due to a lack of BMW 801 and Jumo 213 engines. Only 1,076 were completed before production ended in the summer of 1944.

No Luftwaffe squadrons converted to the type. Rather, they were added to Ju 88 squadrons where their boosted performance was required. Due to its slightly higher speed, it was especially a useful reconnaissance aircraft and remained in use until the end of the war.