Train how to fit into the post war picture 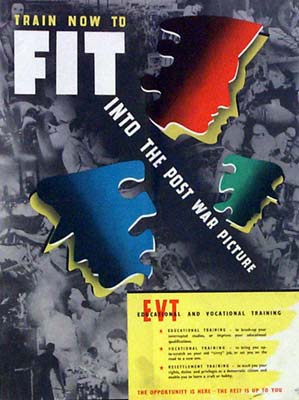 With the war in Europe nearly over, the Royal Air Force drew up plans to provide training for its personnel which, it was hoped, would help them adapt to civilian life once they left the Service.

The RAF Educational and Vocational Training Scheme was launched on a world-wide basis shortly after the defeat of Germany in May 1945. EVT, as it was popularly known, offered a broad syllabus which included courses in subjects such as mathematics, English, French, typing, book-keeping, decorating and citizenship. The women of the WAAF, returning for the most part to the home, were given additional tuition in housecraft, dressmaking and embroidery; while the pursuit of hobbies such as art and music appreciation was actively encouraged for both sexes.

Some 10,000 RAF and civilian instructors were engaged on EVT, generous day-release provision was made for Service personnel to attend local colleges and, where necessary, mobile classrooms were deployed. So it was that the RAF did its bit to beat Britain’s swords into ploughshares!