The Munich Crisis forced action. War may have been postponed but no one believed it had gone away.

With a widespread view that the bomber would always get through and the stories of air attacks on civilians in Spain and China solutions had to be found to provide at least some protection against blast.

Designed in 1938 and named after Sir John Anderson, Home Secretary during the Battle of Britain,

this type of air-raid shelter was designed for use in the garden. When covered with earth the shelter would give some protection from shell fragments and bomber splinters although dampness was an ever present problem.

Designed to accommodate up to six people the government supplied them free to low income families and later sold to others to wealthier people. 1.5 million Anderson shelters were distributed in the months immediately leading up to the outbreak of war. When production ended 3.6 million had been produced.

Intended purely as an emergency protection during air raids, in practice, during the period of the Blitz, it was not uncommon for them to be used every night. 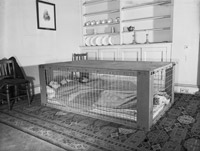 This led to the design of a cage-like construction that could be used as a refuge inside a house. Morrison shelters came in self assembly form and the householder bolted it together. Each pack had 359 parts and three tools supplied.

It was quickly recognized that there was a need to protect members of the public who might be on the streets or in public spaces. 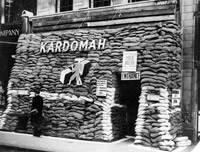 A big programme of street communal shelters was begun in March 1940. These surface shelters were intended to accommodate fifty people.

Problems with quality control, in their hurried construction, meant that some failed to provide the protection expected. Rumours began to circulate and although improved designs were introduced they became very unpopular and remained so throughout the war.

At first government ministers had misgivings about the use of tube stations and underground tunnels as air raid shelters. 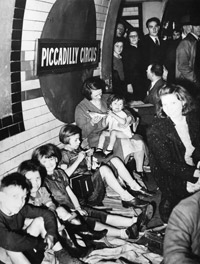 However Londoners preferred to use the tunnels and platforms because they felt safest deep underground.

Stations were fitted with bunks for 22,000 people, supplied with first aid facilities and equipped with chemical toilets. 124 canteens opened in all parts of the tube system. Shelter marshals were appointed, whose function it was to keep order, give first aid and assist in case of the flooding of the tunnels. An estimated 170,000 people sheltered in the tunnels and stations during World War II.

Air raid Precautions personnel were responsible for the issuing of gas masks, pre fabricated air raid shelters and the looking after public shelters.

They were also responsible for maintaining the blackout. They assisted in fighting incendiaries during air raids and rescue work afterwards.

There were around 1.4 million ARP wardens in Britain during the war, almost all unpaid part-time volunteers who also held day-time jobs. 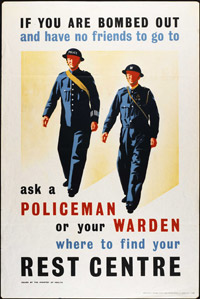 well emerge to find your home destroyed. Where to turn when you have been bombed out? Here is the answer, on the left.