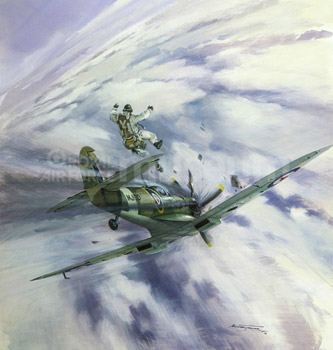 The fundamental purpose of test flying is to make sure that everything works as it should. And sometimes, it doesn’t. At one period, a major problem developed with the failure of the skew gear in the Rolls-Royce Merlin supercharger drive. This was to plague production until it could be solved. One such failure occurred when Alex was returning a Mark IX Spitfire to Castle Bromwich after carrying out a routine test. The engine seized and the aircraft started to vibrate so severely that it began to shake itself to pieces. Alex was thrown out of the aircraft, concussed briefly by hitting part of the machine, lost one of his favourite flying boots and then discovered that his parachute canopy had been damaged during his exit. Fortunately it all held together during his fairly rapid descent.