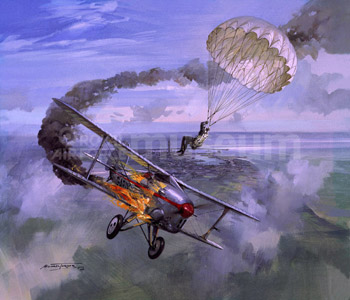 The acquisition of Arrow Active G-ABIX was intended to satisfy Alex Henshaw’s increasing involvement in competitive flying. His father, however, mindful that young Henshaw would be flying more complex and hazardous manoeuvres than he had previously attempted, insisted that Alex wore a parachute. Both of them were thankful that he did so when the aircraft caught fire over Grimsby and Alex had to ‘take to the silk’. The abandoned aircraft descending in a blazing spiral narrowly missed him before it crashed and burnt out near Marsh Chapel.