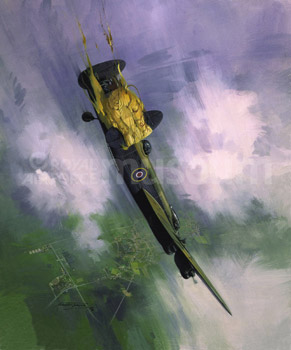 When the Avro Lancaster started production alongside the Spitfire at Castle Bromwich, these four-engined bombers also came under Alex Henshaw’s testing regime. At the end of one such test sequence, a Lancaster was put into a dive to check aileron balance. When reaching maximum speed, the hatch over the dinghy storage in the starboard wing detached itself, and the seven-man sized dinghy escaped and wrapped itself round the starboard rudder. The aircraft plunged towards the outskirts of Birmingham with the controls immovable and the test crew unable or unwilling to bale out. Eventually the dinghy broke free and Alex was able to regain control but with only 1,000 feet to spare.