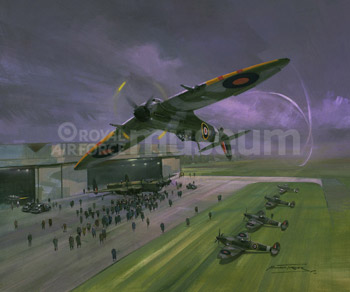 Alex Henshaw flew his first production Spitfire, a Mk II Serial Number P7281, at Castle Bromwich on 15th June 1940. After a frustrating day waiting for the aircraft to be finished, Alex took-off in the late evening. Crossing the airfield from a dive and cutting a swathe through the rising mist, Alex put the aircraft into a vertical climb and three upward rolls, followed by an aerobatic display which put the heart back into all those who had worked so hard all day to finish the aircraft.

Part of Alex Henshaw’s display to demonstrate the Spitfire to visiting dignitaries was a precision roll below hangar height, often had to be carried out in poor weather. Seen by some as highly dangerous, the machine was always under control to his exacting standards, which many could admire but few could equal.