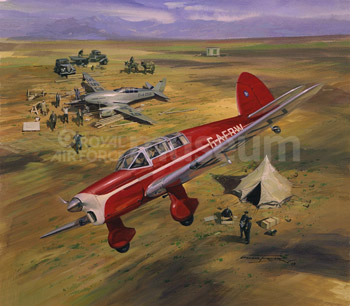 When his friend Arthur Clouston had to force-land de Havilland Comet G-ACSS near Nicosia, Cyprus whilst attempting to break the England to Australia record in February 1938, Alex Henshaw volunteered to fly Jack Cross and his engineer and spares from Essex Aero to effect a rescue. He borrowed a Percival Vega Gull from Charles Gardner, and is pictured arriving over the site at Nicosia. They set out the following day to collect a new propeller from Alexandria, and the repairs were completed satisfactorily.