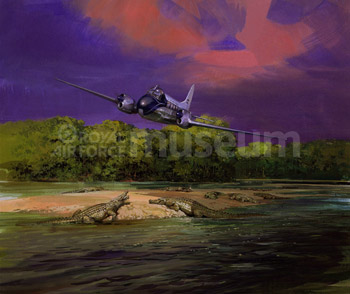 Apart from running Miles Aircraft (South Africa) whilst living in Johannesburg in 1947, Alex was also on the board of the General Mining Company. Part of his duties was to fly executives to business meetings in the company’s de Havilland Dove. An urgent call to return to Johannesburg from one such trip up-country necessitated a late evening stop-over at Port Francqui, an unfamiliar airstrip surrounded by dense jungle. The airfield was wrongly marked on the map and, unable to locate it as darkness fell, Alex flew low over a crocodile-infested river searching desperately for somewhere to put the ‘plane down. His companion eventually spotted a light in the gathering darkness. They landed with great relief, the fuel tanks almost dry, glad to be alive.