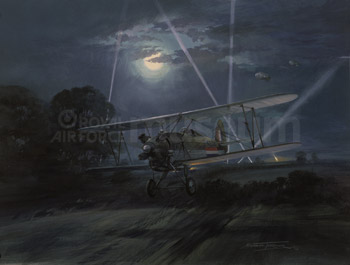 Henshaw used a Hawker Tomtit to fly to and fro between home at Hampton-in-Arden and the Castle Bromwich factory. After a long day’s work test flying, he often flew back after dark across the blacked-out countryside. Any aircraft movement, of course, would waken up the searchlights and the local Anti-Aircraft batteries, so it was rarely a relaxing return from work, particularly as the village was situated between Coventry and Birmingham, two of the Luftwaffe’s primary targets at this period. Using the roads as a navigational guide, he ‘felt’ his way his home and landed close to tall trees in a paddock at the end of the garden, where his wife Barbara would meet him by torchlight.