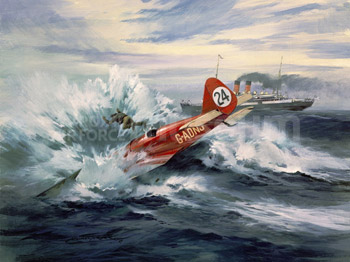 Competing in the 1935 King’s Cup race in a Miles Hawk Major, the aircraft suffered a total engine failure over the Irish Sea. Alex ditched the powerless aircraft close to a passing steamship. Thrown from the cockpit by the impact with the water, he took a ducking, but the ‘Ramsey Queen’ quickly lowered a boat which rescued him just before the wreckage sank.