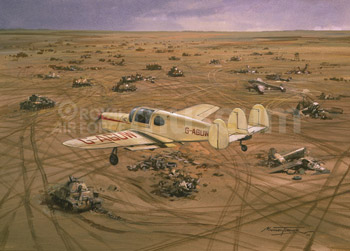 When the civilian aircraft industry got slowly under way after the war, Alex joined Miles Aircraft at its Berkshire base at Woodley. In March 1946 he undertook to fly the first Messenger intended for export out to Johannesburg. His route crossed North Africa and the vast battlefields of the Desert campaign, where the twisted and rusting wreckage of countless abandoned tanks, guns, trucks and aircraft littered the sand as far as the eye could see.