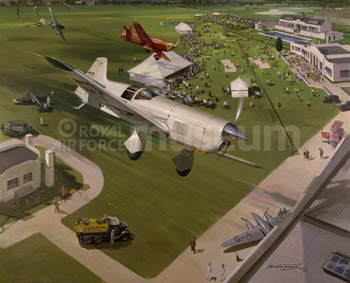 In 1937 Alex bought Percival Mew Gull G-AEXF, and achieved his ambition to win the coveted King’s Cup race in 1938, setting the fastest time ever recorded by a British light aircraft at a speed of 236.25mph. Here he flashes low over the hangars at Hatfield on his last lap, followed by Giles Guthrie’s red Mew Gull which finished second, and third placed Leslie Cliff in his Miles Hawk Major. Comet racer G-ACSS, which damaged a wingtip and was unable to compete, is partly visible below, with the TK2 refuelling on the airfield and the BA Double Eagle rounding the pylon in the background.