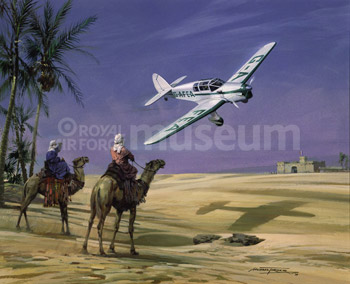 Equipped with a new Percival Vega Gull, G-AFEA, Alex set out with his father in March 1938 on a survey flight to Cape Town, to establish the best route and possible stopping places for his proposed record attempt with Mew Gull G-AEXF. One of their outbound calls was at the Foreign Legion Fort at Colomb Bechar, where the landing ground was no more than the surrounding desert, freely roamed by the local Arabs – Touareg – and assorted livestock.