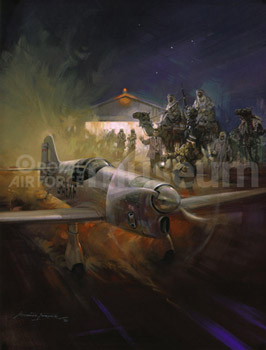 The outward bound leg of an epic London-Cape Town-London record attempt in February 1939. Cramped in his tiny cockpit and watched by camel-mounted Arabs and airfield officials at Gao, Alex Henshaw opens the throttle of Mew Gull G-AEXF to take-off into the darkness. Commissioned by the publishers of Henshaw’s ‘Flight of the Mew Gull’ as the dust jacket of the book, this was the picture which gave rise to the whole series of the “Henshaw’s Adventures” paintings by Michael Turner.