Frank Hale was born in 1895 in New York. He joined the US Army in 1914, serving with the cavalry in the 1916 campaign against Pancho Villa in Mexico. During this campaign Hale had a flight in a reconnaissance aeroplane – the first time America had used them. Bitten by the flying bug, Hale tried to join the US flying service, but was told that his education was not good enough. Instead, he travelled to Toronto and enlisted in the Royal Flying Corps. After training, he was employed as an instructor.

In August, 1918, with the war on the Western Front hanging in the balance, Hale was sent to No.32 Squadron, flying SE5a fighters from RAF Bellevue. German forces had made huge advances through the spring and summer, but with the Allies now starting their counter-attacks, the newly formed Royal Air Force was seeing frantic service. As well as air-to-air combat, aeroplanes were also being used to attack ground targets, flying several operations per day. 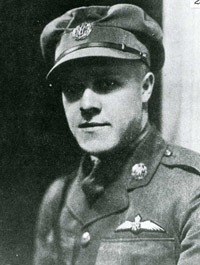 On 25 August Hale scored his first victory, shooting down a Fokker DVII. On 4 September he shot down two more, with a fourth, unconfirmed, victory two days later. On 27 September he attacked a formation of ten Fokker DVIIs single-handed, claiming three of them as victories. For this, he was awarded the Distinguished Flying Cross.

Hale left the RAF in July, 1919. In 1941, despite heart problems, he joined the US Army Air Corps, and was sent to the UK with the 8th Air Force. In 1943 he returned home and was discharged on health grounds, dying in June 1944 in New York.