William Lambert was born in Ohio in 1894. He became a chemist at a steel works, and, eager to take part in the First World War, in 1915 he travelled to Canada to work in a munitions factory. In late 1916 he decided to take a more active part in the war and volunteered for the Royal Flying Corps, following up on a love of flying that he had held since his first flight in 1910.

After training in Toronto, Lambert was sent to Europe, and in March, 1918, he joined No.24 Squadron , flying SE5a fighters in France. With the German Spring Offensive breaking through the Allied lines on the Western Front in late March, this was a hectic period. Aeroplanes were used not only for reconnaissance and air-to-air fighting, but also ground attack to try and stem the German advance. 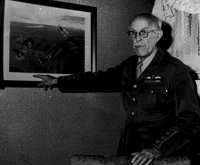 On 7 April 1918 Lambert made his first claim, for an Albatros DV. Over the coming months he would claim at least another 17 victories, receiving a Distinguished Flying Cross after his tenth. On both 17 June and 4 July he claimed two Fokker DVIIs, while on 10 August he claimed three aircraft as shot down. Two days before, on the first day of the Allied counter-offensive on 8 August, he had been shot down himself. Hit while flying at low level by ground fire, he forced landed his SE5a just behind German lines. A German patrol approached, but, keeping them at bay with his revolver, he managed to take off and crashed again in a shell hole just cross the British side of the lines.

On 19 August, exhausted by six months of non-stop operations and being shot down, Lambert was sent back to the UK suffering from a ruptured ear drum and combat fatigue. At the end of the war he returned to America, and served as a Lieutenant Colonel in the US Army Air Force in the Second World War. In 1973 he published “Combat Report”; an account of his time in the RFC. He died in 1982.

Lambert was officially credited with 18 victories, but may have actually achieved between 20 and 22 plus two balloons. If so, this makes him America’s second highest scorer of the war, after Eddie Rickenbacker.