John Worthington Harder, from New York, already held a civilian pilot’s licence when he volunteered for the RAF in October, 1941, aged just 18. By the end of the November he was under training with the RAF contingent at the Spartan School of Aeronautics, Oklahoma.

A few weeks later, America entered the war, but Harder refused the offer of applying for a commission in the US Army Air Corps. He wrote home that he had:

Never been happier in my life, and that I have no regrets about joining the RAF. If it was to be done all over again, I would do it only about a year sooner. It may seem unpatriotic, but this is one American volunteer who will never transfer to the United States Forces. I feel I owe too much to the RAF.

In mid-1942 he was sent to Britain, where he served for a short period with Coastal Command, before transferring onto heavy bombers. He served with Bomber Command until poor vision, for which he needed contact lenses, led to a second transfer.

I now have the lenses and they fit perfectly…

They are really splendid, completely comfortable, unbreakable and invisible. However, due to the fact that contact lenses cut down the light by about 30%, I think you will be glad to know I am giving up the heavy stuff. I am rather pleased in a way to get off night work.

Although continuing to need to wear contact lenses, he was soon training to be a fighter pilot. In March, 1943, he was posted to No.64 Squadron, flying Supermarine Spitfires over France. 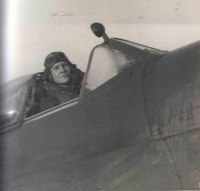 Despite the huge differences between fighters and the aircraft he had been flying, Harder immediately took to his new role, writing to his brother in the US military that he was now flying Spitfire and all that. Afraid you have nothing to match them in all round excellence.

Harder served with No.64 Squadron for the next 16 months, initially in Scotland. Here they flew defensive patrols, Air/Sea Rescue sorties, and also trained in deck-landing techniques with HMS Argus. In August they moved back south and spent the next five months flying offensive patrols over the English Channel and France.

Despite his youth (he was still only 20) he became a flight commander in early 1944 with the rank of Flight Lieutenant. On occasion, his job included leading the whole squadron on patrols.

The squadron came increasingly active in the lead up to the Allied landings in Normandy, and after the invasion was also used for ground-attack. Harder was shot down while conducting one of these operations over Normandy on 24 July, 1944. After an attempted evasion he was captured, and eventually sent to Stalag Luft III at Sagan.

In February, 1945, he was transferred to the satellite camp at Belaria. Shortly after the move he took part in the Long March, as the Germans marched their prisoners further away from the advancing Russians. According to later letters he was liberated by the Russians, but then escaped from Russian lines and made his way to American forces in early May.

Harder considered remaining in the RAF as a career option, and after a period of leave in America he joined No.567 Squadron. However, it is clear from his letters that he was feeling constrained by the routine and regulations of the peace-time RAF. Harder left the RAF in February, 1946.

The next thirty years would see Harder flying as an instructor in the Middle East, forming his own aviation companies, and flying as a test pilot for Boeing. He died in 1977.