Parke Smith was born in Richmond, Virginia, in 1920. He obtained a private flying licence while still a teenager, but failed the medical examination to fly for the US Navy. Instead, in late 1941 he went before the Clayton Committee, and was accepted to train for the Royal Air Force.

After flying training at a civilian school at War Eagle Field, Los Angeles, Smith sailed for the UK, arriving in a war-torn London in 1942. In his memoirs, he recounts how: 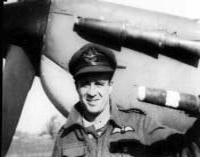 I wandered around London for the rest of the day, trying to absorb the massive destruction done by the relentless, almost continuous, day and night bombing. The buildings left standing were covered with dust and grime and blackened with smoke from the fire storms caused by phosphorous incendiaries. In some instances, whole blocks had disappeared, leaving gaping foundations filled with rubble. The sky was filled with tethered, sausage-like anti-aircraft balloons with dangling wires, all dancing in the stiff breezes.

After further training, and the considerable culture shock of encountering the RAF’s ways of operating, Smith was post to the Middle East in early 1943. In August, 1943, he joined No.253 Squadron, flying Supermarine Spitfires over North Africa, and later supporting the campaign in Italy and Salerno. In December, 1943, he transferred to No. 225 Squadron. Although also equipped with Spitfires, their role was Army Co-Operation, mostly spotting for artillery.

In May, 1944, with 109 operational sorties in his log book, Smith was sent back to the UK. On the agreement that an operational posting would follow, he was sent as an instructor to No.41 Operational Training Unit, at RAF Harwarden.

In March, 1945, Smith was posted back to an operational unit, No.65 Squadron at RAF Peterhead. In their North American Mustang IIIs, their role was fighter cover for the long range maritime strike wings that dominated the Norwegian coasts. Smith would complete twenty-two intensive operations with the unit before the end of the war.

After a brief spell with a Ferry Unit, Smith was sent home to America on leave. At the end, he returned to the UK, to the puzzlement of his friends and family:

It was difficult for them to understand, but after all, the British had trusted me enough to send me on this leave, with no assurance of my return, and knowing the temptations I would face. They had given me a chance to fly when my country had turned me down, and… had given me to posting to No.65 Squadron as promised. There was also the matter of the oath I had taken to their King and a thing called “loyalty.”

In December, 1945, Flt Lt Parke Smith was demobilised, and returned to Virginia.