In 1940 the American pioneer and racing aviatrix Jackie Cochran came up with the idea of forming a women’s auxiliary unit to support the United States Army Air Corps. Her idea was rejected, but in 1941 she approached Britain with the idea of supplying female American pilots for the ATA.

One American, Ruby Garrett, was already serving with them, and Cochran hoped that a larger contingent would help her prove her case to the US military.

The ATA asked for 200 volunteers, but shortages of personnel and the stringent entrance tests meant that in April, 1942, Cochran arrived in Britain with just 25 female pilots. Once in Britain they faced further tests and instruction. Not all of them passed, leading to complaints from Cochran that the training was too difficult. Most saw the need for the strict standards, though.

ATA pilots would be expected to fly a wide range of aircraft, while the poor weather and crowded landscape made flying, and navigation, a much different proposition in Britain than in America.

Within six months Cochran had returned to America to form the Women Airforce Service Pilots (WASP). Several of her recruits returned with her, and more did so over the following year. Several more travelled to Britain to replace them, however, and some would remain in the ATA until the end of the war. 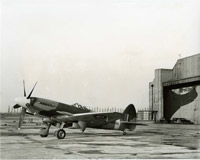 In all, 27 American women served with the ATA, enduring danger in the air and on the ground, meagre rations, low pay, and uncomfortable living conditions. One, Mary Nicholson, would be killed in a flying accident.