By early 1942 all three Eagle Squadrons were equipped with Supermarine Spitfires, and were regularly taking part in ‘sweeps’ over France.

Some of these were fighter patrols, seeking out air or ground targets, while others were escort operations for bombing raids.

Their greatest test came on 19 August, 1942, when all three squadrons were involved in Operation Jubilee – the landings at Dieppe. This large-scale raid by British and Canadian troops on the French coast was supported by a huge RAF effort.

Nos.71 and 133 Squadrons both took part in four operations over the beaches, and No.121 made three sweeps. Between them, they were to claim nine enemy aircraft destroyed, four probably destroyed and fourteen damaged, for the loss of one pilot killed and one prisoner of war, both from No.121.

In September, 1942, the Eagle Squadrons were transferred to the United States Army Air Force.

America had joined the war in December, 1941, and had begun to send forces to Britain in mid-1942. There was pressure to transfer the experienced pilots of the Eagle Squadrons to the American forces, but there were several problems. Many of the pilots had failed the USAAF medical tests before they had volunteered for the RAF. None had ever been award US pilot’s wings, either. The USAAF wanted to split the squadrons up, to spread their experience around, while the pilots wanted to stay in their own squadrons. There were also insufficient aircraft available,

until the USAAF acquired Supermarine Spitfires. Finally, many of the pilots were reluctant to leave their adopted force to join the more formal USAAF, despite the guaranteed commissions for the sergeant pilots, promotions for the officers, and higher rates of pay. 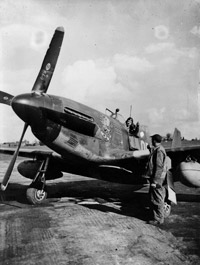 Of the roughly 250 Americans who had served with the Eagle Squadrons, 78 had been killed while with the RAF and 16 had become prisoners of war; a further 29 were killed after their transfer to the USAAF and 18 captured.