The Black volunteers had learned a lot about Britain at school and most considered that they were in a real sense ‘coming home’ to the mother country. On arriving here, however, many experienced culture shock. The people of Britain were not like white people in the colonies and, for the first time, they encountered men, women and children of different social classes and backgrounds. The volunteers also met people from other islands in the West Indies for the first time. There was rivalry and sometimes antagonism between men of the different contingents.

All of the volunteers from the Black colonies had to get used to the British climate and the rationed British food. While it could do nothing about the weather, the RAF sometimes managed to obtain Caribbean foodstuffs for the newcomers. Social and sports facilities were also made available, and in the cricket season the inclusion of West Indian players helped break down barriers and made RAF teams difficult to beat.

Few white British people had met a Black person before and most were ignorant about the volunteers and their homelands. This ignorance, combined with the prejudice and insensitivity of individuals, sometimes caused misunderstandings and conflict between the volunteers and their new hosts. Nevertheless, according to veterans, British people were ‘generally friendly’ and they were grateful that Black people were fighting by their side.

“My first impression was how bloody cold and gloomy it was.”
Jamaican Airman

“A darling old couple humbly begged to be allowed to shake my hand for luck. Until then I thought that sort of superstition was confined to uneducated colonials.”
Jamaican Airman

“We were the first coloured people they’d ever seen and we got the best of everything. We received an allowance from the government for extra sugar because we drank our tea sweet.”
Guyanese Engine Fitter

“I admired their strong sense of justice and the guts with which they were prepared to fight for it. The average Britisher proved to be a very fine and decent person once he got to know the African.”
Sierra Leonean Navigator

“Black men could dance and swing their hips which the white women loved. This caused jealousy and fights. The women stood up for the Black men and fought with their stiletto heels.”
Jamaican Radar Operator

“We were treated very well by the RAF and by the local civilians. People were kind and went out of their way to be helpful because we were all fighting for the same cause.”
Jamaican Clerk

“’You will like it in Nigeria, it is just like this.’ That was how he proposed.”
British WAAF Education Instructor

“I never encountered any racism but my fellow officers thought I was mad to have volunteered. They said they would have caught the boat going the other way if they had known what was in store.”
Jamaican Pilot 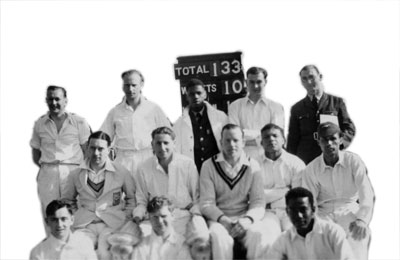 By the end of the war, however, fears of post-war unemployment and a widespread nostalgia for peacetime conditions meant the welcome extended to the volunteers had begun to wear thin.

“It is to be regretted that among ground personnel a spirit of tolerance and broadmindedness is at times lacking.”
Air Ministry

“I see you are dancing with the white girls! If you were in Germany you would have been shot, you black b******!”
British Soldier

“After I was demobbed in Nottingham a Padre said to me: ‘When are you going home?’ I was shocked; if a Padre could say that, what must everyone else be thinking.”
Caribbean airman

“It was as if it was okay to be over here while there was an emergency, but in 1945 we weren’t wanted anymore.”
Jamaican Teleprinter Operator