As in the First World War, Britain’s African colonies provided essential raw materials and foodstuffs including iron ore from Sierra Leone and cocoa from Nigeria. The Caribbean colonies offered natural resources such as aluminium ore from British Guiana (Guyana) and oil, which was plentiful in Trinidad. Coffee, rum and bananas were also exported. While these essentials were being sent to the mother country, there were severe shortages in the West Indies and rationing was introduced. Connie Mark of the Auxiliary Territorial Service remembered:

“Once we were short of rice, and asking a Jamaican not to eat rice and peas on a Sunday is a crime!” 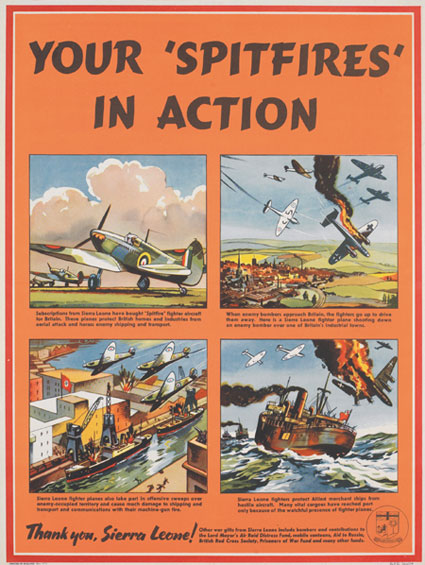 Fund-raising campaigns were very successful and during the war West Africans donated over £1.5 million (worth around £39 million today), while the Caribbean colonies raised £500,000 for war charities with a similar sum collected to purchase aircraft. ‘Presentation’ aircraft and sometimes whole squadrons were donated to the RAF, and 91 (Nigeria) Squadron, 249 (Gold Coast) Squadron, 74 (Trinidad) Squadron and 139 (Jamaica) Squadron are examples. This patriotic initiative originated in Jamaica and was soon adopted throughout the Empire and Commonwealth.

Britain established important naval and air bases in the Black colonies. At Takoradi, Gold Coast (Ghana), crated aircraft were unloaded from ships, reassembled, and flown to RAF units in the Middle East. At the same time, Royal Navy ships and RAF aircraft based at Freetown, Sierra Leone, defeated German submarines attacking convoys off the coast of West Africa. U-Boats were also active in the Caribbean, but Allied ships and aircraft operating from bases in the West Indies eventually defeated the submarine menace there.

An unexpected legacy of the war in the Caribbean was the development of steel drums or ‘pans’, many of which were made from oil drums discarded by the US Navy in Trinidad. 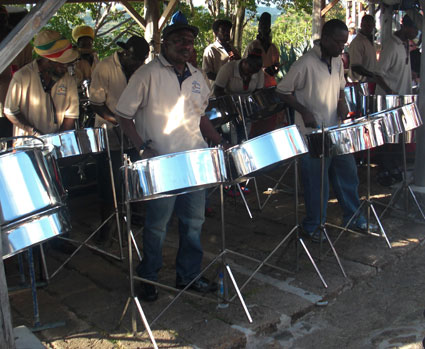