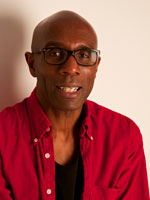 “I was a restless Black working class 16-year-old in 1975. Joining the RAF was a respectable way to escape home. My vague concerns about a racist canteen culture proved unfounded. I was good at my job in air traffic control, and felt as respected and included as anyone else.

RAF life was enjoyable enough and I’ve no regrets, even though I bought myself out early to take a law degree and later qualify as a barrister. I’m now a freelance photographer, specialising in portraiture. It’s been a fascinating and very rewarding experience.

By chance, over 20 years later, I met some West Indian World War II Army veterans. It turned out that one of them had served in the British Army with my late Jamaican grandfather during the war.

They insisted that I join them at the Cenotaph at the next Remembrance Sunday ceremony as part of a small contingent of Black ex-servicemen. I’d become a pacifist and Quaker by then, so had some reservations, but they stressed how important it was that there was a continuing Black presence at these kinds of events after they had died. They worried that people might forget that the fight against Hitler and what he stood for was won with the help of people like them, who didn’t fit the stereotype of the brave white war heroes usually depicted in film, fiction and documentary.

We got a very warm welcome from the crowds as we marched around Whitehall. I felt immensely proud, very emotional, and powerfully present to the memory of my late grandfather and his distinguished war service.”