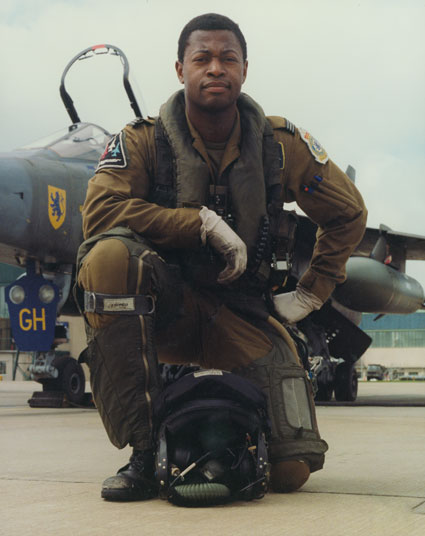 “I was born in Woolwich, east London, to West Indian parents who had migrated to Britain in the early 1960s. I grew up in a pretty tough housing estate, but I attended the Grammar School in Dartford and worked hard. In 1985, I joined the RAF as an officer in the RAF Regiment, but I later transferred to aircrew, starting my flying training in 1987. I received my ‘wings’ at RAF Valley the following year and, after coming top of the Tactical Weapons course, I became a fighter pilot flying Jaguars. I eventually joined 54 Squadron at RAF Coltishall.

The first time I flew the Jaguar with 1000lb bombs and the guns fully armed with high explosive bullets, I could not believe that a lad from east London was authorised to bomb and strafe a deserted island in a multi-million pound single-seat fighter aircraft.

My tour on Jaguars was eventful as the Squadron was deployed several times to Turkey flying missions over the ‘no-fly zone’ in North Iraq. We also operated from Southern Italy, supporting NATO forces during the Bosnian conflict.

After my time on 54 Squadron, I became a flying instructor on the Tucano aircraft at RAF Linton-on-Ouse. I left the RAF as a Flight Lieutenant in 1997 to join British Airways and I am currently an Airbus Captain.

I consider myself to have been a very ordinary London kid who was trained by the RAF to do very extraordinary things.”