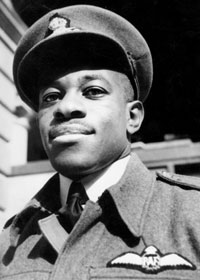 Peter Thomas was born in Lagos, Nigeria in 1915. He admired Britain and the British giving as his reason:

“My great-grandfather was a chieftain. One day his rival betrayed him to a slave dealer. He was put on a ship along with 100 other slaves and was soon on his way to America. Ten days out in the Atlantic his ship was intercepted by one of Her Majesty’s ships. The slaves were rescued, and at Freetown (Sierra Leone), my great-grandfather regained his freedom.”

Thomas decided to fight for freedom by joining the RAF. He travelled from Nigeria to the UK to enlist and, on 17 September 1942, he became the first Black African to qualify as a pilot and the first to be commissioned as an officer.

Between September 1942 and December 1944, Thomas flew with a succession of training units. He was promoted to Flying Officer in March 1943 and, in September 1944, to Flight Lieutenant. He was a popular officer, liked by his comrades for his courtesy and good humour and respected for his strong religious faith.

On 12 January 1945, while serving with No. 4 Radio School at Madley, Flight Lieutenant Peter Thomas was killed in a flying accident in bad weather. The thirty-year old Nigerian is buried in Bath Cemetery.