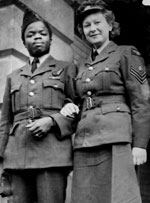 Dulcie King was born in May 1923 at Gravesend in Kent. In August 1942, at the age of 19, she joined the WAAF and served for two years as an equipment assistant. After VE Day, Flight Sergeant King was posted as an education instructor to RAF Bicester, near Oxford.

David Oguntoye was a school supervisor in Nigeria when, in 1942, he volunteered for the RAF. He arrived in Britain in June 1943, and was selected to train as a navigator in Canada. Returning too late to see war service, Flight Sergeant Oguntoye was posted to Bicester as a welfare officer for the Caribbean airmen stationed there. In the summer of 1946, he met Dulcie King and they began courting.

Some of their colleagues disliked the fact that Dulcie had chosen a Black boyfriend. On one occasion a group of airmen tried to attack David, but Dulcie intervened to protect him. The couple continued to be seen together, and in October 1946 they attended a dance at Bicester:

“He sat on the arm of my chair with his arm ostentatiously around me. This, of course, was something we never normally did in public, but we intended to demonstrate unmistakably our relationship.”

David and Dulcie married on 16 November 1946, shortly after leaving the air force. They both qualified as lawyers before going to live permanently in Nigeria in April 1954. In 1964, David was selected as a Court President while Dulcie became first a Magistrate and, in 1976, a High Court Judge. David died in June 1997, but Dulcie remained in Nigeria where she was a tribal chief and ‘benevolent matriarch’ to her late husband’s family until her death, aged 95, on 12 November 2018.