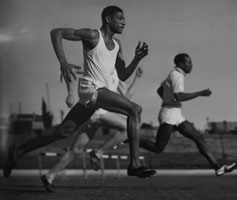 Arthur Wint was born in Plowden, Jamaica in May 1920. A keen sportsman from an early age, by 17 he was the Jamaica Champion Boy Athlete. Six feet five inches tall, modest and with a quiet manner, the Jamaican was aptly nicknamed the “Gentle Giant.”

In 1942, Wint and his two brothers, Lloyd and Douglas, joined the Royal Air Force and travelled to Canada to train as aircrew. In 1944, he won his ‘wings’ and was described as “a very keen pilot.” Wint saw active service flying Spitfires and left the RAF in 1947 with the rank of Flight Lieutenant.

After the war, Wint won a scholarship to St Bartholomew’s (Barts) Hospital to study medicine. In 1948, he captained the record-breaking Jamaican team at the Olympic Games in London; winning a Gold medal in the 400 metres and Silver in the 800 metres.

Wint practised as a doctor in Britain for several years before returning to Jamaica. In 1973, he was awarded the Jamaican Order of Distinction for his services to charities and schools, and the following year he became Jamaica’s High Commissioner in London. Arthur Wint again returned to Jamaica in 1978, serving at Linstead Hospital until his retirement in 1985. He passed away in 1992.

“The single most important element to the influence of Arthur on my generation was the sense of Jamaica, the Caribbean, as a great centre of potential excellence. We were, comparatively speaking, a tiny part of the world with a very small population, but here we were producing people who were running world records, Olympic records, who were taking on the best at the highest level and winning.”

During the war, Mr Manley had himself served as an officer in the Royal Canadian Air Force.