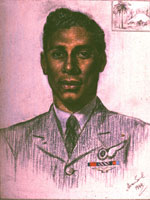 Philip Louis Ulric Cross was born on 1 May 1917 in Port of Spain, Trinidad. After high school, he worked on Trinidad’s railways, but his real love was aviation. With the outbreak of the Second World War in September 1939, and the Fall of France the following June, Ulric Cross saw the situation demanded action:

“The world was drowning in fascism and America was not yet in the war, so I decided to do something about it and volunteered to fight in the RAF.”

Cross arrived in Britain in November 1941 and trained as a navigator. He was commissioned as an officer and then posted to 139 (Jamaica) Squadron at RAF Marham. This unit was so named because it flew bombers paid for by the people of Jamaica.

Pilot Officer Cross excelled as a navigator and was selected to join the élite Pathfinder Force. These crews had the difficult and dangerous task of marking targets accurately for bombing raids. Cross was promoted to Flying Officer and, in June 1944, he received the Distinguished Flying Cross (DFC). In 1945, he was awarded the Distinguished Service Order (DSO) for his “fine example of keenness and devotion to duty” and his “exceptional navigational ability.” Cross twice refused to be rested from flying and by the end of the war he had completed 80 missions against targets in occupied Europe and Germany.

Cross left the RAF as a Squadron Leader in 1947 and practised law in Ghana and Tanzania. He later became a High Court Judge in his native Trinidad. In 1990, he was appointed High Commissioner for Trinidad and Tobago in London.