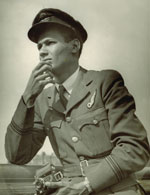 Cyril ‘Cy’ Grant was born on 8 November 1919 in Beterverwagting, British Guiana (Guyana). Passionate and cultured, as a young man he came to detest colonial rule and was inspired by the example of Toussaint l’Ouverture, the leader of the Haitian revolution.

In 1941, Grant joined the Royal Air Force in the first wave of aircrew recruited from the Caribbean. He was selected to train as a navigator and commissioned as an officer. In 1943, he joined 103 Squadron which was equipped with Lancaster bombers. On his third mission, over the Ruhr, Grant’s aircraft was shot down and he was captured by the enemy. While a prisoner of war, the young Guyanese had time to think:

“As an officer in the RAF, you were among the cream of officers. I met all sorts of people, including writers, schoolteachers, lecturers and scientists. And, living for two years close together, I learnt a great deal and asked a lot of questions – that’s where I matured, actually.”

After the war, Grant remained in Britain and trained as a barrister. He qualified in 1950, but unable to find work as a lawyer, he took up acting and singing. His calypso performances on the Tonight show made him the most popular African-Caribbean performer on British television. Grant admitted his professional frustrations led him to become “a very angry Black man” by the 1970s. In 1974 he founded Drum, Britain’s first Black arts centre, which provided a showcase for Black acting talent.

Grant’s account of his wartime experiences ‘A Member of the RAF of Indeterminate Race’ was published in 2006. Two years later, he helped to set up an online archive to commemorate Caribbean aircrew from the Second World War. Grant was best known for his poetry and his philosophical writings, and his groundbreaking ‘Blackness and the Dreaming Soul’, published in 2007, is considered his most influential work.