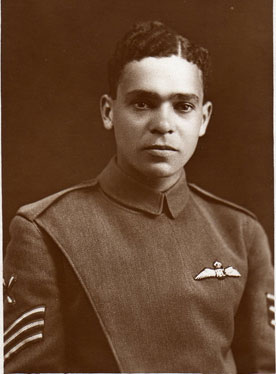 William Robinson Clarke was born in Kingston, Jamaica, on 4 October 1895. With the outbreak of war, ‘Robbie’ Clarke paid his own passage to Britain and joined the Royal Flying Corps (RFC) on 26 July 1915. At first, he served as an air mechanic, but on 18 October he was posted to France as a driver with an observation balloon company. Clarke wanted to fly, however, and in December 1916 he was accepted for pilot training in England. On 26 April 1917, Clarke won his ‘wings’ and was promoted to Sergeant.

On 29 May 1917, Sergeant Clarke joined 4 Squadron RFC at Abeele in Belgium and began flying R.E.8 biplanes over the Western Front. While on a reconnaissance mission on the morning of 28 July, he and his observer, Second Lieutenant F.P. Blencowe, were attacked by enemy fighters. He described the action in a letter to his mother:

“I was doing some photographs a few miles the other side when about five Hun scouts came down upon me, and before I could get away, I got a bullet through the spine. I managed to pilot the machine nearly back to the aerodrome, but had to put her down as I was too weak to fly any more … My observer escaped without any injury.”

Robbie recovered from his wounds, and after the war returned to Jamaica to work in the building trade. He was an active veteran and became Life President of the Jamaican branch of the Royal Air Forces Association.

William Robinson Clarke, the first Black pilot to fly for Britain, died in April 1981. He is buried at the Military Cemetery at Up Park Camp, Jamaica.