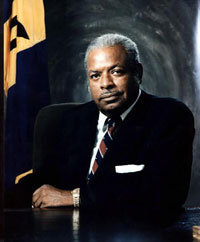 Errol Walton Barrow was born in Nesfield, Barbados, on 21 January 1920. A gifted student, Barrow won three scholarships, the last in 1939 to study Classics at Codrington College. With the outbreak of war, however, the young Barbadian travelled to Britain to volunteer for the RAF.

Barrow joined the RAF in London on 31 December 1940, and was eventually selected as an Observer (Navigator). After training in Britain and Canada, he was commissioned as an officer on 4 November 1944. Barrow was posted to 88 Squadron and completed 48 bombing operations against targets in occupied Europe and Germany. Squadron Leader Alfred Barnes remembered him as:

“A bloody good Navigator – first class. Get you there, get you back. Never saw Barrow get in a flap…a good man to have along.“

After VE-Day, Flying Officer Barrow was chosen as the personal navigator of Marshal of the Royal Air Force Sir William Sholto Douglas, commander of the RAF in Germany. Barrow later studied at the London School of Economics and, in October 1950, he returned to Barbados as a lawyer.

Errol Barrow was drawn to politics, and in 1955 he formed the Democratic Labour Party (DLP) to press for social and political reform and independence from British rule. The DLP came to power in 1961 and Barrow served as Premier, leading his country to independence on 30 November 1966.

As Prime Minister of Barbados, Barrow introduced measures to reduce poverty and ignorance and improve the quality of life of ordinary Barbadians. He also developed industry, commerce and tourism on the island. Barrow lessened Barbados’ reliance on foreign powers, especially the United States, and strengthened ties between the English-speaking countries of the Caribbean.

Errol Barrow served as Prime Minister until 1976. He returned to power with an overwhelming majority in May 1986, but died in office on 1 June 1987 aged only 67. His gravestone reads: