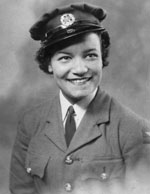 Lilian Bader (née Bailey) was born in Liverpool on 18 February 1917. Her father was a Barbadian who had served in the Royal Navy and her mother was Irish. Orphaned at the age of nine, Lilian was brought up in a convent. With the outbreak of war in 1939, she worked briefly in a Navy, Army and Air Force Institutes (NAAFI) canteen, but was forced to leave because she was Black.

On 28 March 1941, Lilian Bader volunteered to join the WAAF and chose to train as an Instrument Repairer. During her training, she received the news that her brother Jim, who was serving in the Merchant Navy, had been killed at sea. She nevertheless passed her course ‘First Class’, becoming one of the first women in the air force to qualify in that trade. Posted to RAF Shawbury, Lilian worked long hours checking for faults in the instruments of the aircraft based there. She was good at her job and was promoted to Acting Corporal.

In 1943, Lilian met and married Ramsay Bader, a Black tank driver. She fell pregnant and was discharged from the WAAF in February 1944. After the war, Lilian studied for a degree at London University and became a teacher. Her younger son flew helicopters in the Royal Navy and later became an airline pilot.