On 22 September 1934, Sir Alan Cobham attempted to fly from Portsmouth, England to Karachi, India without stopping. 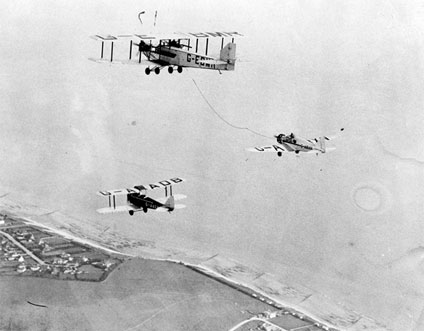 Cobham’s Airspeed Courier aeroplane would be refuelled by aeroplane tankers along the journey using an early form of in-flight refuelling.

Cobham successfully refuelled twice when disaster struck. His throttle became loose and he had no control over the engine. Without power Cobham managed to glide his aeroplane into a safe landing.

Despite the abrupt ending of the flight, Cobham successfully proved the potential of in-flight refuelling to long distance aviation