In the Shadow of the Himalayas

After arriving in India, Alan Cobham flew to Jalpaiguri in West Bengal to climb and photograph the nearby Himalaya mountains. 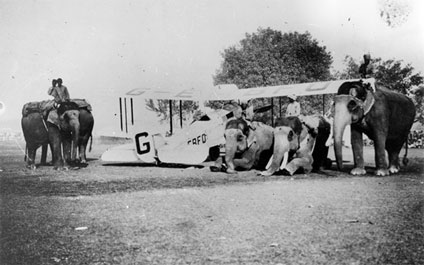 However, when he landed he feared that the jubilant crowds that surrounded him might destroy his aeroplane. Cobham discovered that this crowd had never seen an aeroplane before and their excitement overcame them.

The guards for his aeroplane could not stop the crowds so a herd of elephants was used to encircle his aeroplane to protect it from harm until a fence could be built.