Established in April 1942 the Empire Central Flying School (ECFS) was based at RAF Hullavington in the United Kingdom.

With flying training taking place on such a vast scale the School worked to maintain and improve flying training standards at the flying schools operating throughout the world. 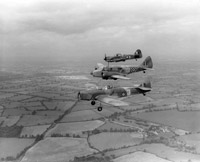 It was a coming together of international flying personnel with considerable flying or ground instruction experience or of operations. Courses met to examine existing teaching methods, flying techniques and to try out ideas which were discussed.

Recommendations were made to the Air Ministry and some suggestions made by the School continue to form part of RAF flying training policy today.

Comparisons between the ECFS and the School of Special Flying have been made. During the 1940s as in the 1910s the emphasis was upon the knowledge of the principles behind flying training and the attainment of a standard rather than an accumulation of flying hours.

After the Second World War a reduction in flying training took place and the Central Flying School was re-established. In 1946 the ECFS was renamed Empire Flying School. It was disbanded in 1949 with some staff moving to RAF Manby to open the RAF Flying College.