Flight simulation is an important part of current RAF pilot training. However, simulated flight is not a new idea. Its benefits were discovered early on as a safe way to introduce pilots to the ‘feel’ of an aircraft and get them used to the controls. Initially, this was done in real aircraft modified to keep them on the ground. Then, around 1910, the first true simulators emerged. These were often quite crude constructions, moved manually to represent the pitch and roll of an aircraft. Gradually the manual operator was replaced by an automatic system that could actually respond to the actions of the pilot.

The first automatic electrical simulator was patented in 1929 in the United States and featured a dummy fuselage controlled by motors linked to the rudder and steering column. Disturbances to mimic turbulence were introduced by means of a perforated tape. It was from this type of machine that the most successful synthetic trainer, the Link Trainer, developed. Designed by Edwin Link, it used pneumatic bellows to control pitch and roll and a small motor-driven device to produce disturbances. 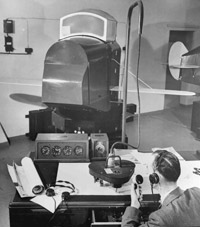 Link was the first to fit instruments to his trainers to teach pilots instrument flying. By the beginning of the Second World War many major air forces were undertaking basic instrument training on Link Trainers. As well as solo trainers, simulators emerged that could accommodate multiple crew members and teach navigation and gunnery too.

After the war, emphasis began to shift away from simulating aircraft movement. It was felt that pilots should focus on instrument flying. Simulators were built so they did not move. 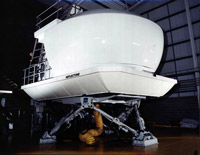 The development of digital computers in the 1950s and 1960s meant that real-time simulation became a possibility. Coupled with the reintroduction of motion systems to the trainers, trainees could now really feel like they were flying a real aircraft. Another important development was the addition of scenery. This had been experimented with since the first simulators but it was only with the emergence of more powerful computers that realistic displays became possible.

Today, simulators are recognised as a safe and cost-effective way of training pilots in certain aspects such as emergency procedures. Trainees can expect to spend more than 60 hours on synthetic trainers. The computers used can produce real-time 3D visual displays of any terrain. Instructors can programme in other aircraft as well as weather conditions to really test trainee pilots, blurring the boundary between ‘real’ and ‘simulated’ flight.