By the 1970s, an efficient training pattern had been established and the Royal Air Force (RAF) concentrated on upgrading their training aircraft.

By this time the requirement for an additional training unit for multi engine aircraft also became evident. In 1977 the Multi-Engine Training Squadron was formed at RAF Leeming. This created another stream for student pilots who were not suited to fast jet or rotary wing (helicopter) flying. This practice of streaming helped reduce the number of pilots being rejected.

During the 1970s the low-level tactical strike role of the RAF was developed. Previously, pilots had flown high-level operations in aircraft such as the Avro Vulcan. Now they needed to be trained in low-level attack methods in aircraft like the Blackburn Buccaneer and the new SEPECAT Jaguar. To do this at the Operational Conversion Units meant using highly expensive operational aircraft, which were needed 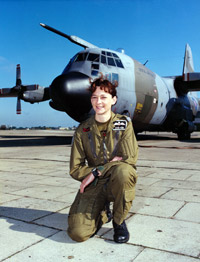 elsewhere. Consequently, a Tactical Weapons Unit (TWU) was formed at RAF Brawdy in 1974 specifically to teach these new skills. Demand for this training was so great a second TWU was formed at RAF Chivenor in 1978. At this time a new jet trainer was introduced that would take jet training into the Eighties and beyond, the BAe Hawk.

There were a number of organisational changes in this period. In 1977, RAF Training Command was absorbed into Support Command. In 1994 it was separated again to create Personnel and Training Command, which was responsible for all recruitment and training of RAF personnel. By this time the first female RAF pilots had been trained and were operational. The RAF had long known the potential of female pilots but the issue of deploying women in frontline roles proved a sticking point. Qualified female pilots were assigned solely to instructional and other non-combat roles until 1994 when the first female operational fast jet pilot graduated.

Synthetic trainers were not a new idea in the 1970s but during this period, the increasing power of computers led to the development of flight simulators providing very realistic flight scenarios for pilot training. As a result, ground-based flight simulation has become an integral part of RAF training at all levels.

In 2007, RAF training was brought to the heart of the organisation when Personnel and Training Command merged with Strike Command to form Air Command.