The possibility of flight has always fascinated mankind.

Over the next decade flying caught the imagination of many. To pilot an aeroplane was

both a new and an exciting experience. Pioneer aviators experimented with flight. Through trial and error they took to the skies in aeroplanes they had often built themselves.

As flying became more popular these self-taught pilots instructed others to fly and soon civilian flying schools became established. From 1910 airfields in the United Kingdom such as Brooklands, Larkhill, Eastchurch and Hendon became centres of tuition where pupils paid to learn to fly.

By this time the Royal Navy and the British Army had already begun to investigate the possibilities of aviation. In April 1912, the Royal Flying Corps (RFC) with its Military and Naval Wing was formed. In May the Central Flying School (CFS) was also set up at Upavon. 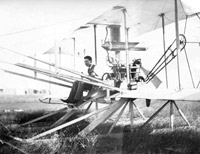 Personnel who were qualified pilots could attend courses. They were taught advanced flying skills and a ground instruction syllabus focused on aerial warfare. In July 1914, the Royal Naval Air Service (RNAS) was created and the Admiralty became responsible for training naval aviators separately at its site at Eastchurch.

In just a few years, flying developed from a popular past-time to a means for waging war. With the outbreak of the First World War in 1914 the use of an aircraft as a weapon quickly became a reality.