In September 1939 trained pilots were urgently needed if the Royal Air Force (RAF) was to meet its operational commitments. The struggle and success in achieving the required number of pilots is one of the overlooked ‘battles’ of the war. 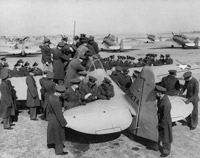 Time was of the essence. Initial revisions to the training programme focused on shortening courses and increasing the capacity for pupils at the flying training schools. This did not work, however, and difficulties arose with the limited amount of equipment available and a shortage of flying instructors.

The United Kingdom turned to the British Empire and its allies for help. Air training agreements were made with countries including the United States, Canada and India. These international arrangements were vital in training the vast numbers of men being recruited into the RAF at this time. From 1941 the majority of flying training took place overseas. By 1945 110,600 pilots 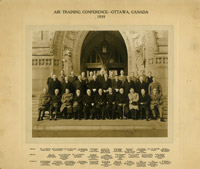 had been trained on behalf of the RAF in nine different countries.

It quickly became apparent through operational experience that the standard of pilot training also had to be improved. It was clear that quality had been sacrificed for quantity, and from 1941 onwards, the training syllabus was reviewed. Changes in operational procedure required additional training and the development of more modern aircraft required a higher standard of flying technique and piloting skills.

By 1943 a surplus of trained pilots had been produced. This, combined with lower than expected operational losses, meant that a ‘running down’ of the training capacity of the RAF began as early as 1944. With war coming to an end in 1945, 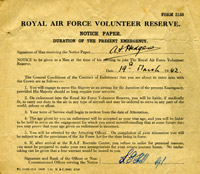 flying training was re-organised again to adjust to the RAF’s peace-time requirements.