By 1938 pupil pilots attended two-month, civilian-run, elementary training courses at an Elementary and Reserve Flying Training School. They learnt aviation theory and logged 55 hours flying (with an average of 29 dual and 26 solo). 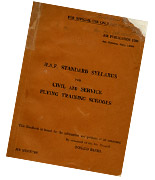 The course at a Service-run FTS lasted six months and covered both intermediate and advanced training. Students could expect to log about 90 hours airborne (with an average of 25 dual and 65 solo) and were taught night, formation and instrument flying, navigation and gunnery. At the end of the course students received their Pilot’s Wings and were selected for training to fly fighters or heavier types of aircraft.

Having qualified as pilots, further training was undertaken with operational units.