Between March 1910 and August 1914, 863 people learnt to fly in the United Kingdom qualifying for the Royal Aero Club Aviator’s Certificate. 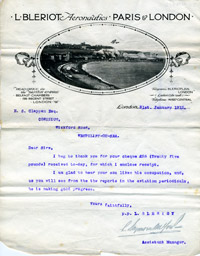 Both men and women could attend one of the many civilian flying schools competing for business. The courses on offer generally lasted two to three weeks and cost £75, which in today’s money is £5,700. Learning to fly was an expensive hobby.

As this Grahame-White Aviation Company Limited brochure indicates the lessons were designed to build up a pupil’s skill and confidence in handling an aircraft. 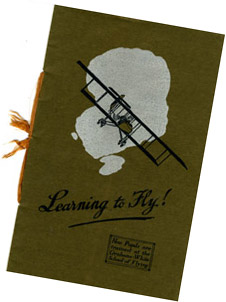 Ground based instruction in the cockpit was given and solo ‘rolling’ which involved taxiing the aeroplane along the ground was also taught. In the air the pupil first flew with an instructor.

Flying solo was the next step. Initially these flights were flown straight before including turns. The pupil was taught to turn left and later to turn right to finally fly figures of eight. At this stage the pupil could take the test flights which were necessary to obtain a Royal Aero Club Aviator’s Certificate.

For Navy and Army personnel advanced flying courses were held at the Central Flying School (CFS). These lasted several months. 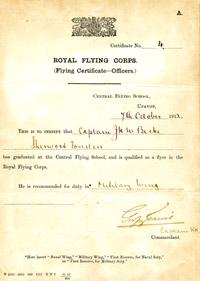 Pupils were already qualified pilots and were taught to fly new types of aircraft. Flights with an instructor were followed by 20-30 minute solo flights at an altitude higher than 1500ft. Cross country flights were then undertaken.

Lectures were also attended. Subjects included aerial reconnaissance, map-reading and the role of aircraft in war. Practical sessions were completed in the workshop too.

Practical and written examinations were taken at the end of the course. On passing these the pupils graduated and received their flying brevet or Pilot’s Wings. 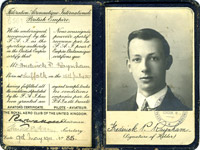