All RAF aircrew were volunteers.

After selection student pilots progressed through several stages of training. Tests and examinations had to be successfully passed before the next level of instruction could be undertaken.

During basic training at Elementary Training Schools pupils learnt the basics of how to fly in aircraft such as the de Havilland Tiger Moth and flew their first solo flight. 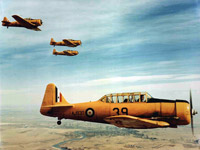 The time taken to qualify as a pilot could vary. At the start of the war it could be as little as six months (150 flying hours). On average it took between 18 months to two years (200-320 flying hours).

The pathway taken to becoming a pilot also changed during the course of the war. The charts on the right/left highlight the differences between 1941 and 1944.

Of course obtaining Pilot’s Wings did not mark the end of training. Qualified pilots were sent to Operational Training Units to make them ready for front-line duties.

During a pilot’s operational career attendance on specialist training courses also kept him up to date with new technical developments and changes in operational procedure.