In the first part of his log book Corporal Tredrey sets out the sequence of his flying instruction from its start on 11 August 1930 to the award of his Pilot’s Wings on 6 May 1931. 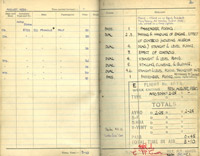 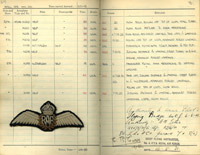 In a letter written on 3 January 1934 Flight Lieutenant Greenlaw voices his concern about the impact on pilot training of time lost by students due to sports injuries. His Commanding Officer is unimpressed, however, replying:

“I do not want you to write rubbish like this. Show me the statistics.” 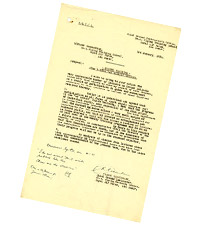 During his pilot training at Desford Mr Kemp regularly corresponded with his friend, Miss Freda Powell. Here he describes (on a broken typewriter) the crash of a De Havilland Tiger Moth:

“It appears that one of the budding short service commission trainees was up doing steep turns when he heard a bang in the aircraft, which proceeded to start falling out of the sky… so our friend proceeds to hop out and floats down with his brolly (i.e. parachute) while the Moth snorts down from 2000 feet and tries to bury itself in the deck…

Furthermore, when stalled, the aeroplane is temporarily out of control and it falls until it has regained enough speed to become airborne again…

RESULT…heavy-handedness + ignorance of fundamental principles of flight have cost the service about £800 worth of aeroplane and the bloke his RAF career.” 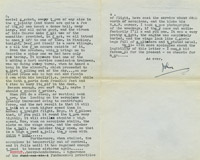