“The incident took place on 1 June 2007. At 2315 hours Flight Lieutenant Goodman was alerted that there was a serious casualty following a mortar attack on an isolated British location in the centre of Basra City. Landing an aircraft at this location is assessed to be very high risk and intelligence reports indicated a large, ‘spectacular’ attack would occur somewhere in Basra, with a helicopter being a possible target. Flight Lieutenant Goodman was fully aware of the elevated threat level.

Alert to the high risk, but being fully conscious of the importance of providing unfailing Instant Reaction Team (IRT) support to ground forces, Flight Lieutenant Goodman elected to fly her approach, whilst under intense enemy direct and indirect fire. Maintaining a firm control of the situation whilst flying tactically on Night Vision Goggles at very low level across a hostile city, she commenced a most expeditious transit and approach to an unfamiliar and dangerous landing site.

She continued her approach, undeterred by close friendly covering fire and even closer enemy fire which began to impact to the rear of the aircraft. Despite the most complex approach, with numerous obstructions and ambient conditions on the limit of aviation operations, she executed a landing with few visual references bringing the aircraft in next to the casualty. The medics and Aviation Reaction Force left the aircraft as four mortar rounds landed in and around the location; however, she remained in full control of the situation and elected to hold the aircraft on the ground as the option with least risk. 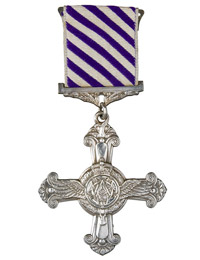 The top cover Lynx helicopter was by now reporting several substantial explosions in the area, which were believed to be either enemy mortars or Rocket propelled Grenade fire. With the casualties loaded, Flight Lieutenant Goodman departed the helicopter landing site just as further explosions occurred in close vicinity to the aircraft. Additionally, her aircraft detected possible enemy missile engagement and automatically discharged flares as a counter measure. She departed the area, her path covered by very close friendly artillery fire to distract enemy forces.

Flight Lieutenant Goodman flew rapidly from the area, making maximum use of the aircraft’s performance, crew and supporting assets to achieve a safe transit clear of the area. The aircraft landed at the British Field Hospital just 14 minutes after launch. Many IRT sorties are high risk. However, on this occasion Flight Lieutenant Goodman had to instantly weigh up the risks against the importance of recovering a serious casualty, which would impact on morale throughout the coalition.

Without the IRT, the casualty would have died within 15 minutes. Despite extreme pressure, whilst in the face of the enemy, she made the right decision. This was a bold and daring sortie which undoubtedly saved life.”

Michelle Goodman – in her own words