Lieutenant
Charles Rumney Samson makes the first take-off from a ship when he pilots
a Short S38 from a specially built wooden platform on board the battleship
HMS Africa on the River Medway in Kent.

27 January
Captain H.P.T. Lefroy of the Royal Engineers, succeeds in transmitting
and receiving a signal from the airship Beta to Aldershot Wireless Telegraphy
Station in the first successful trial of wireless telegraphy from a British
Army airship.

April
The Balloon Factory is renamed the Army Aircraft Factory. 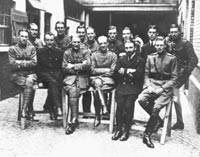 The
Royal Flying Corps is formed. Constituted by Royal warrant it is to include
a naval wing, military wing, a central flying school at Upavon and an
aircraft factory at Farnborough.

22 May
Admiralty Airship No.1 ‘Mayfly’ is removed from her shed for the first
time and moored in the centre of the Cavendish Dock in Barrow-in-Furness.

A
new British altitude record is established by the new Royal Aircraft Factory
BE2 two-seat observation biplane over Salisbury Plain when it flies at
3,219 metres (10,560 feet).

4 June
Corporal Frank Ridd of the Royal Engineers becomes the first Non Commissioned
Officer to qualify as a pilot in the United Kingdom.

19 June
The Central Flying School of the Royal Flying Corps is opened at Upavon
in Wiltshire, under Captain G. Paine of the Royal Navy.

The
first British military aeroplane trials are conducted at Larkhill in Wiltshire.
Samuel Cody wins the speed competition in his Cody Cathedral aeroplane.

August
The Royal Navy obtain their first French aircraft, a Breguet biplane,
which is their sixth aeroplane after five Shorts.

13 August
Major Hugh Trenchard, a Boer War veteran, is posted to the Central Flying
School as an instructor after winning his aviation certificate at Larkhill.

25 August
The first recorded recovery from a spin is made by Lieutenant Wilfred
Parke of the Royal Navy, while flying an Avro biplane.

12 September
The War Office places a ban on Royal Flying Corps pilots flying monoplanes
after a spate of crashes.

22 September
Following a series of modifications, Admiralty Airship No.1 Mayfly is
provisionally accepted by the Royal Navy on the condition that air trials
are successfully completed.

24 September
While being removed from its shed to commence acceptance trials, Admiralty
Airship No.1 ‘Mayfly’ is caught by a sudden squall and after being righted
her back broke. The airship is not repaired and never flies.

19 November
The Admiralty contracts Vickers to produce a biplane armed with a machine
gun. This aircraft becomes the EFB1.

Also this year…
A Flanders monoplane undertaking experiments at Farnborough and Brooklands
is the first service aircraft with radio in United Kingdom. The aircraft
is fitted with a Marconi 6V battery-operated tuned-spark transmitter.
By August 1914 the Royal Flying Corps and Royal Naval Air Service had
a total of sixteen aircraft and two airships fitted with spark transmitters.

A bombsight is developed in the United Kingdom by Leonard Robinson,
a 15 year old Darmouth cadet. It is rejected by Admiralty but works on
the same principles as later sights accepted for service use.

A Martin-Handasyde Dragonfly monoplane breaks up in mid-air at Richmond
in Surrey, killing the pilot Graham Gilmour and increasing concern over
the safety of monoplanes.