16-17 April
Lieutenant R. Cholmondeley flies a Maurice Farman biplane from Larkhill
to Upavon and back, on the first night flight made by an aeroplane of
No.3 Squadron of the Military Wing.

June
The Australian Minister of Defence, Senator G.F. Pearce, announces the
formation of the first military flying school in the British Empire outside
the United Kingdom. The school is subsequently established on a 295 hectare
site at Point Cooke in Victoria, during the early months of 1914. 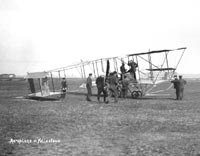 Aircraft from Yarmouth, Leven and Cromarty participate in naval manoeuvres.
The manoeuvres demonstrate the need for a larger seaplane, more capable
of withstanding the rigours of the North Sea than those then in service
and the importance of fitting wireless transmitters to all seaplanes,
both for transmitting scouting reports and to enable crews to call for
assistance in the event of a forced landing.

17 July
The Royal Navy accepts the Short brothers’ Folder seaplane and assigns
it to HMS Hermes at Sheerness.

7 August
The aviation pioneer Colonel Samuel Franklin Cody is killed when attempting
to land on Laffan’s Plain at Farnborough.

The
Royal Flying Corps’ first sea crossing by the is made by four aeroplanes
of No.2 Squadron, flying across the Irish Sea to Rathbone Camp in County
Limerick for manoeuvres.

3 October
Major G.C. Merrick becomes the first pilot to be killed while training
at the Central Flying School, when the Short biplane in which he was flying
crashes.

26 October
The aircraft requirements of the Royal Navy are outlined in a minute by
the First Lord of the Admiralty. The First Lord states that aeroplanes
and seaplanes are required for both ‘oversea’ (maritime) and home defence
duties.

According to official historian Sir Walter Raleigh, three new types of
aircraft were recommended, “first, an oversea fighting seaplane,
to operate from a ship as base; next, a scouting seaplane, to work with
the fleet at sea; and last, a home-service fighting aeroplane, to repel
enemy aircraft when they attack the vulnerable points of our island, and
to carry out patrol duties along the coast.”

22 November
Captain C.A.H. Longcroft of No.2 Squadron flies non-stop between Montrose,
Portsmouth and Farnborough in a Royal Aircraft Factory BE2. His flight
covers a distance of 445 miles in a time of 7 hours 20 minutes. In recognition,
Captain Loncroft receives the Royal Aero Club’s Britannia Challenge Trophy.