28 June
Archduke Franz Ferdinand of Austria is assassinated in Sarajevo, precipitating
a chain of events that led directly to the outbreak of the First World
War.

1 July
The Naval Wing of the Royal Flying Corps is reorganised to become the
Royal Naval Air Service (RNAS).

20 July
A Royal review of the Fleet takes at place at Spithead during 18-22 July
1914. As part of the review, a flight of naval aeroplanes manoeuvred over
the Fleet, providing the new Royal Naval Air Service (RNAS) with its first
opportunity to demonstrate the manner in which aircraft could be employed
in naval operations. 17 seaplanes and 4 airships also took part in the
demonstration.

29 July
Instructions are issued with regard to the war role of the Royal Naval
Air Service (RNAS). The Royal Naval Air Service was to be confined to
protecting vulnerable points from attacks by hostile aircraft and scouting
and patrol duties were to be considered secondary. All aircraft were to
be kept ready for action.

2 August
Germany demands right of passage for her armies through Belgium.

4 August
Britain declares war on Germany, with effect from 2300hrs.

Following mobilisation the headquarters of the Royal Flying Corps, Nos.
2, 3, 4 and 5 Squadrons and the Aircraft Park are deployed to France.

On August 13, Nos. 2, 3 and 4 Squadrons flew from Dover to Amiens and
on the following day, No.5 Squadron flew from Southampton to Boulogne.
Subsequently, all of the Royal Flying Corps squadrons were concentrated
at Amiens in support the British Expeditionary Force. The flying squadrons
were later transferred to Maubeuge aerodrome.

Brigadier-General Sir David Henderson KCB DSO assumes command of the
Royal Flying Corps in the field. At this time, the Royal Flying Corps
on the Continent mustered some 105 officers, 63 aeroplanes and 95 vehicles.

19 August
Captain P. Joubert de le Ferte, in a Blériot of No.3 Squadron,
and Lieutenant G.W. Mapplebeck in a Royal Aircraft Factory BE2c of No.4
Squadron take-off from Maubeuge at 0930hrs to carry out the first Royal
Flying Corps reconnaissance flights of the First World War. Neither sortie
was particularly successful, as both pilots lost their way and failed
to locate either the enemy or the Belgian Army, whose respective whereabouts
they had been asked to ascertain.

22 August
Sergeant-Major D.S. Jillings, an observer serving with No.2 Squadron Royal
Flying Corps, becomes the first British serviceman to be wounded in an
aeroplane when his aircraft was hit by ground fire during a reconnaissance
sortie over advancing German columns.

22 August
The Royal Flying Corps (RFC) fly twelve reconnaissance sorties. One of
these observed German movements that indicated the right flank of the
German advance through Belgium would turn the left flank of the British
Expeditionary Force position at Mons.

22 August
An Avro of No.5 Squadron becomes the first British aircraft to be lost
in action, when shot down by rifle fire over Belgium. Lieutenant V. Waterfall
and Lieutenant C.G.G. Bayly were killed.

Captain
H.C. Jackson and Lieutenant E.L. Conran of No.3 Squadron made the first
British bombing attack while flying over Lessines at 1130hrs. They aimed
a single bomb at three German aircraft on the ground. It exploded wide
of the mark.

25 August
The first British aerial victory of the First World War is achieved, when
a German Taube aircraft is forced to land by three aircraft of No.2 Squadron.
One of the British aircraft also landed, and the crew chased the German
crew into nearby woods. They then set fire to the German aircraft before
taking off again.

28 August
The first recorded effective British bombing attack is undertaken by Lieutenant
L.A. Strange of No.5 Squadron. He dropped a home-made petrol bomb on a
German truck near Mons. The vehicle swerved off the road and caught fire.
The blazing petrol also caught the following truck which also caught fire.

3 September
Royal Flying Corps reconnaissance reports to Field Marshal Sir John French
the new south-easterly and easterly direction of march of General von
Kluck’s German First Army. The information is passed to the French Commander-in-Chief,
General Joffre who realised that von Kluck’s movement would expose his
flank to the French armies near Paris. He ordered the counter-attack that
led to the Battle of the Marne. Joffre later said that “The British
Flying Corps had played a prominent, in fact a vital part, in watching
and following this all-important movement on which so much depended. Thanks
to the aviators he had been kept accurately and constantly informed of
Kluck’s movements. To them he owed the certainty which had enabled him
to make his plans in good time.”

The counterstroke on the Marne prevented the quick victory that Germany
sought in the West. As a consequence, Germany was faced with a war on
2 fronts with forces potentially much stronger than herself.

15 September
The first use of air photography and wireless telegraphy for artillery
observation in combat takes place during Battle of the Aisne.

16 September
The Canadian Aviation Corps is formed with two officers and one aircraft,
a Burgess-Dunne biplane.

22 September
The first British air attack on Germany takes place when four aircraft
are despatched to attack the Zeppelin sheds at Dusseldorf and Cologne.
Due to poor weather conditions, only one, a Sopwith three-seater of No.1
Squadron, Royal Naval Air Service, flown by Flight Lieutenant C H Collett,
reached its designated target. Three bombs were dropped on the shed at
Dusseldorf, one fell short and two failed to explode.

24 September
Lieutenants D.S. Lewis and B.T. James use airborne radio for the first
time in warfare. Both members of No.4 Squadron, Royal Flying Corps, were
involved in directing an artillery shoot from the air during the 1st Battle
of the Aisne. Their radio log begins “A very little short. Fire!
Fire!” And ends 40 minutes later with “I am coming home now”.

October
The first British aerial propaganda raid is undertaken by Lieutenant Colonel
Swinton. The leaflets were printed by the Continental Daily Mail in Paris
and attempted to convince the German soldier that he was facing imminent
defeat.

October
The German cruiser Königsberg is sighted in the Rufiji Delta in German
East Africa. A Militaryian Curtiss flying boat was requisitioned by the
Admiralty and deployed from South Africa to the area to locate the cruiser;
this was replaced by a Royal Naval Air Service seaplane unit from February
1915. However, effective action against the ship proved impossible until
July 1915.

October
The Royal Flying Corps (RFC) begins to employ maps with a ‘gridded’ reference
system, using letters and numbers, allowing accurate communication from
aircraft to artillery of enemy positions pinpointed to within a few yards.
Previous maps had no common grid. Shortly afterwards a ‘clock code’ was
introduced, allowing rapid corrections of the fall of artillery rounds
by aircraft.

26 October
The Royal Flying Corps suffers its first fatalities due to ‘friendly fire’.
Lieutenant C.G. Hosking and Captain T. Crean of No.4 Squadron were killed
when their Royal Aircraft Factory BE2 was shot down by British ground
fire over Poperinghe.

4 November
A Royal Flying Corps (RFC) detachment, drawn from officers of the Indian
Central Flying School, and equipped with three Maurice Farman aircraft,
leaves the United Kingdom en route to Egypt to support Indian Army units
guarding the Suez Canal. The detachment arrived at Alexandria on 17 November.
On arrival in Egypt, the detachment acquired a further 2 Henri Farman
aircraft from Heliopolis and two Maurice Farmans, together with a Royal
Aircraft Factory BE2, from India. The detachment was based at Ismailia.

5 November
Britain & Turkey are in state of war.

22 November
The first enemy aircraft is shot down by a British aircraft. Lieutenants
L.A. Strange and F.G. Small in an Avro biplane of No.5 Squadron engaged
a German Albatros. The Avro was fitted with a machine gun in spite of
orders for Strange to desist from machinegun experiments. Two drums were
emptied into the enemy aircraft, which made a forced landing behind Allied
lines near Neuve-Église. The two German crew members were uninjured
and were captured by the British aviators who landed nearby. The Albatros
had been hit 20 times by the British fire.

29 November
The Royal Flying Corps (RFC) is re-organised into wings, effectively decentralising
the Service. Wings were henceforth to be attached to Army Corps. The Military
Wing was abolished and the Farnborough Squadrons, Depot, Aircraft Park
and Record Office were regrouped as the Administrative Wing, under the
command of Lieutenant Colonel E.B. Ashmore.

21 December
Field Marshal Lord Kitchener decrees that expansion plans to increase
the Royal Flying Corps to 30 squadrons are too modest and doubles the
planned strength to 60 squadrons.

11 December
The British roundel is adopted for aircraft identification. 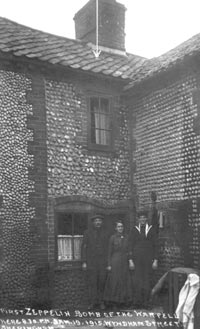 The
first confirmed attempt to attack the United Kingdom by air takes place.
A Friedrichshafen FF29 floatplane of the German Navy’s See Flieger Abteilung
1 (Seaplane Unit No.1) dropped two bombs on Dover Harbour, both of which
fell into the sea.

24 December
The first successful bombing attack on a target in the United Kingdom
takes place. Following an attempted attack on 21 December, a second Friedrichshafen
FF29 floatplane of See Flieger Abteilung 1 (Seaplane Unit No.1) dropped
a single 22 pound bomb, which blew a crater 10 feet wide and 4 feet deep
in the garden of a Dover resident. There were no casualties. Although
two British aircraft were scrambled in response to the attack, the aircraft
was not intercepted.

25 December
The first enemy aircraft is intercepted over the United Kingdom. During
an attempted attack on the London dock area, a Friedrichshafen FF29 floatplane
of See Flieger Abteilung 1 (Seaplane Unit No.1) was intercepted over Erith
by a Royal Flying Corps Vickers Gunbus based at Joyce Green. During the
subsequent pursuit, the FF29 released 2 bombs, which landed in a field
near Cliffe railway station. The Gunbus crew broke off their attack when
the aircraft’s solitary Vickers-Maxim machine gun jammed and although
damaged, the FF29 succeeded in returning to base.