January
The Experimental Photographic Section of the Royal Flying Corps (RFC)
is formed under the command of Lieutenant J.T.C. Moore Brabazon (later
Lord Brabazon of Tara).

19-20 January
The German Navy mounts the first airship raid on Britain. Three Zeppelins
(L3, L4 and L6) were despatched; one was forced to turn back with engine
difficulties 90 miles from the English coast. The remaining airships bombed
Great Yarmouth and King’s Lynn, killing 2 residents of Yarmouth and injuring
3, and killing 2 and injuring 13 residents of King’s Lynn. These were
the first British Militaryian casualties due to air attack.

The first night air defence sorties are flown by the Royal Flying Corps
(RFC). Following the attack by Zeppelins L3 and L4, two Vickers FB5 Gunbuses
of No.7 Squadron were ordered to take-off from Joyce Green and patrol
over the southern outskirts of London, without result.

February
Headquarters of the Royal Flying Corps (RFC) directs that one flight in
each squadron is to specialise in bombing as well as normal duties.

17 February
The seaplane carrier HMS Ark Royal arrives off the Island of Tenedos to
conduct air operations in support of Royal Navy vessels attacking Turkish
fortifications in the Dardanelles.

10 March
The Battle of Neuve Chappelle opens. The assault on Neuve Chappelle is
based, for the first time in the history of warfare, on maps prepared
solely by photographic reconnaissance. The battle also included the first
attempt at air interdiction, with bombing attacks on railways at Courtrai,
Menin, Lille, Douai, and Don by Royal Flying Corps aircraft carrying 25
pound and 100 pound bombs in an effort to delay the progress of enemy
reinforcements. However, Royal Flying Corps Headquarters judged only 3
out of 141 railway attacks to have been successful. The aircraft also
bombed a divisional headquarters at Fournes.

24-26 March
Elements of No.3 Squadron, Royal Naval Air Service, arrive at Tenedos
aerodrome with 18 aircraft of varying types to support operations in the
Dardanelles.

28 March
The first flight by an aircraft from Tenedos aerodrome takes place to
reconnoitre Turkish positions.

The
first German Fokker Eindekker enters service on the Western Front. The
Eindekker was armed with a synchronised machine-gun firing through the
propeller arc and as such, has often been described as the first true
fighter aircraft. This marked the beginning of the ‘Fokker Scourge’.

1 April
No.9 Squadron is re-formed at Brooklands. This squadron would subsequently
to form the basis of the Royal Flying Corps School of Wireless.

22 April
During a gas attack at Ypres in Belgium, Royal Flying Corps (RFC) aircraft
spot the gas cloud moving towards French troops and are able to warn them
of the danger.

British Commonwealth and French forces begin to land on the Gallipolli
Peninsula.

Second Lieutenant W.B. Rhodes-Moorhouse of No.2 Squadron, Royal Flying Corps,
is awarded the Victoria Cross, the first to be won by an airman, for heroism
displayed during a low-level bombing sortie against Courtrai railway station
in Belgium. His successful attack, flying a Royal Aircraft Factory BE2,
in the face of heavy ground fire was judged to have been the most important
bombing sortie of the war to that point. 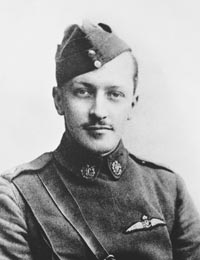 The award was posthumous; although mortally wounded during the attack,
Rhodes-Moorhouse successfully flew his damaged aircraft back to the Royal
Flying Corps airfield at Merville in order to lodge a full report of the
attack.

30 April
Allied aeroplanes arrive in South West Africa for use against German forces.

4 May
Kite balloons are used for artillery observation in France for the first
time.

9 May
The Battle of Aubers Ridge. After an initial failed attempt on 25 April,
the Royal Flying Corps (RFC) made the first concerted attempt to mount
‘contact patrols’, consisting of low flying aircraft seeking to identify
for higher headquarters the exact whereabouts of friendly troops during
an attack. 3 aircraft of No.16 Squadron attempted to fulfil this role
during assault on Aubers Ridge, sending down 42 wireless messages reporting
on the progress of ground troops, who displayed white sheets measuring
7 feet by 2 feet. At this time troops did not have the benefit of portable
radios, and could only send back information on their progress by means
of runners. Although perhaps better than nothing, Contact Patrols were
never to prove a wholly reliable method of obtaining information on what
would now be called the ‘Forward Line of Own Troops’.

10 May
Royal Flying Corps pilot Captain L.A. Strange manages to regain control
of his Martinsyde S1 Scout after he falls out and hangs on when trying
to free a jammed ammunition drum.

31 May
German Army Zeppelin LZ38 carries out the first air raid on London. A
house at 16 Alkham Roadin Stoke Newington was hit. 7 members of the public
were killed and a further 35 injured. 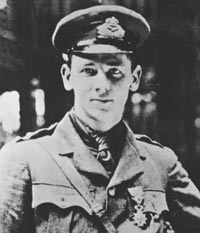 The
Victoria Cross is awarded to Flight Sub-Lieutenant R.A.J. Warneford of
No.1 Wing, Royal Naval Air Service (RNAS), for downing Zeppelin LZ37 (Oberleutnant
von der Haegen) near Bruges in Belgium. He dropped six 9 kilo (20 pound)
Hales bombs onto it from above in a Morane Saulnier Type L3253.

17 June
Flight Sub-Lieutenant R.A.J. Warneford VC of No.1 Squadron, Royal Naval
Air Service (RNAS), is killed with his passenger, American journalist
H.A. Needham, when his Henri Farman F27 two-seat reconnaissance bomber
of rolled over during a steep turn near Paris.

12 July
Following an inconclusive exchange of fire on 6 July, the monitors HMS
Severn and HMS Mersey re-engage the German Navy cruiser Königsberg,
which had been trapped in the Rufiji Delta by blockships. A seaplane of
the Royal Naval Air Service provided spotting for the monitors until forced
to land due to a combination of engine trouble and damage from anti-aircraft
shrapnel. The Königsberg was destroyed during the bombardment.

The
Victoria Cross is awarded to Lieutenant Lanoe G. Hawker of No.6 Squadron,
Royal Flying Corps, for his actions during an offensive patrol over France
and in recognition of the continuous courage he demonstrated while flying
a Bristol Scout 1611, with a hastily fitted cavalry carbine.

31 July
The Victoria Cross is awarded to Captain J.A. Liddell of No.7 Squadron,
Royal Flying Corps, for his actions during a reconnaissance patrol over
Ostend in Belgium. His observer was Second Lieutenant R.H. Peck and the
aircraft a Royal Aircraft Factory RE5, 2457.

August
The first systematic scheme for training observers is introduced.

12 August
Flight Commander C.H. Edmonds of the Royal Naval Air Service makes the
first aerial torpedo attack as he sinks a Turkish supply ship in the Sea
of Marmara, Dardenelles, flying a Short 184 seaplane from the seaplane
carrier HMS Ben-My-Chree.

17 August
Flight Commander C.H. Edmonds sinks a second Turkish vessel with an aerial
torpedo. While a Short 184 seaplane flown by Flight Lieutenant G.B. Dacre
of the Royal Navy, sinks a Turkish tug. However, the plane was not airborne
at the time and needed to release the torpedo in order to be able to take-off
from the water. 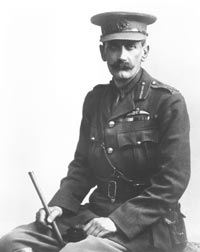 Colonel
Hugh Trenchard assumes command of the Royal Flying Corps in France in
succession to Sir David Henderson. Trenchard was promoted to Brigadier
General and quickly requested another squadron by the middle of September.
He further suggested that one squadron be provided for each Army Corps
for artillery work, photography and close reconnaissance, and one squadron
for each Army headquarters, for Army reconnaissance.

Trenchard also suggested that there should be a headquarters squadron
for General Headquarters (GHQ) work and that a further squadron be provided
for each Army for special work such as bombing raids.

23 August
Captain A.J. Liddell of the Royal Flying Corps is awarded the Victoria
Cross for valour while flying a Royal Aircraft Factory RE5.

Major
Lanoe G. Hawker of No.6 Squadron, Royal Flying Corps (RFC) is awarded
the Victoria Cross for shooting down three German Albatros biplanes while
flying a Bristol Scout C biplane and armed only with a bolt-action rifle
mounted beside the cockpit.

23 September
No.2 and No.3 Wings of the Royal Flying Corps begin the first concentrated
interdiction campaign aimed at disrupting German communications, in support
of the Allied offensive at Loos. The attacks continued until 16 October.
Rail lines were damaged in 16 places, 5 trains were destroyed and a signal
box and railways sheds at Valenciennes were wrecked.

4 October
In a special order of the day, the Commander-in-Chief of the British Expeditionary
Force Field Marshal Sir John French expresses to Brigadier General H.M.
Trenchard and all ranks of the Royal Flying Corps his appreciation of
“the valuable work they have performed during the battle of Loos,
he desires especially to thank pilots and observers for their plucky work
in co-operation with the artillery, in photography and bomb attacks….
Throughout these operations the RFC have gallantly maintained the splendid
record they have achieved since the commencement of the campaign”.

8 October
No.26 Squadron is formed at Netheravon from personnel of the South African
Air Corps previously engaged in the campaign in German South-West Africa.
The squadron subsequently embarked for East Africa in December 1915 to
participate in operations against German forces in Tanganyika.

November
The Royal Flying Corps’ 5th Wing, consisting of No.14 and No.17 Squadrons,
supported by an Aircraft Park, arrives in the Middle East. The Wing was
commander by Lieutenant Colonel W.G.H. Salmond. 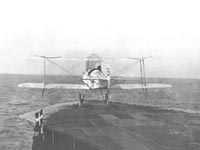 The
first land plane to be flown from an aircraft carrier is piloted by Flight
Lieutenant H.F. Towler of the Royal Naval Air Service (RNAS), when he
flies a Bristol Scout C from the seaplane carrier HMS Vindex during launching
experiments.

Corps,
is awarded the Victoria Cross for his actions during a fighting patrol
across German lines. Air Mechanic T.H. Donald was observer-gunner in a
Vickers FB5, 5074.

19 November
The Victoria Cross is awarded to Squadron Commander R. Bell-Davies of
No.3 Squadron, Royal Naval Air Service, for rescuing a downed airman (Flight
Sub-Lieutenant G.F. Smylie) after completing a bombing attack on Ferejik
Junction in Bulgaria in a Nieuport 12, 3172.