1 January
The Royal Flying Corps (RFC) School of Photography is formed at Farnborough. 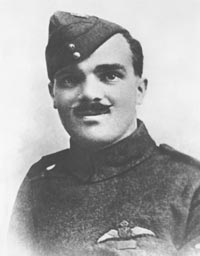 The Victoria Cross is awarded to Sergeant T. Mottershead of No.20 Squadron,
Royal Flying Corps.

This is the only Victoria Cross to be won by a non-commissioned officer
of the Royal Flying Corps during the First World War, for recovering his
burning aircraft, a Royal Aircraft Factory FE2d, from a fighting patrol
in Ploegsteert Wood in France and for saving the life of his observer,
Lieutenant W.E. Gower.

Captain C.F. Collet of the Royal Flying Corps becomes the the first British
service flyer to make parachute jump when he uses a Calthrop ‘Guardian
Angel’ parachute for an experimental jump from 600 feet.

The Government approves a scheme giving the Air Board responsibility for
experimental work and approval of aircraft design, the number to be ordered
and their allocation between the Services. The Ministry of Munitions undertakes
production, inspection and delivery.

19 February
The first recorded casualty evacuation flight is carried out by the Royal
Flying Corps (RFC), when a wounded trooper of the Imperial Camel Corps
is flown from Bir-el-Hassana in the Sinai Desert to the airfield at Kilo
143 in an Royal Flying Corps aircraft. This would have been a three-day
journey by the available surface transport, but the flight took 45 minutes. 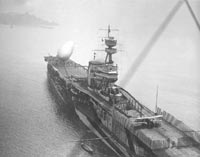 While
under construction, the battle-cruiser HMS Furious is ordered to be converted
into an aircraft carrier.

March
A remotely controlled bomber is tested unsuccessfully at Upavon. 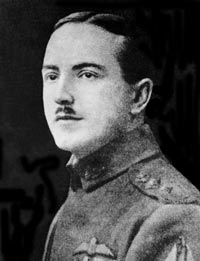 During the first week of April, the Royal Flying Corps loses 75 aircraft in combat over the Western Front. The aircraft and tactics of the German Jagdstaffeln (Fighter Squadrons) are shown to be greatly superior to those of the Royal Flying Corps and its French and Belgian allies. By the end of the month the British air services lose 150 aircraft and 316 aircrew in what would become known as ‘Bloody April’. The French and Belgian air services lose an additional 200 aircraft.

In an effort to counter German submarines in transit to and from their
hunting ground in the shipping channels surrounding the United Kingdom,
the Royal Naval Air Service (RNAS) institutes the ‘Spider Web’ patrol
system centred upon the North Hinder Light Vessel.

The Victoria Cross is awarded posthumously to Captain Albert Ball of No.56
Squadron, Royal Flying Corps, in recognition of his “most conspicuous
and consistent bravery” in the skies over France in a Royal Aircraft
Factory SE5 (A4850).

Captain Albert Ball is posted missing in action. Although the circumstances
surrounding his death remained unknown for many years, it is now believed
that Captain Ball was not shot down, rather, he span out of cloud inverted
and crashed after shooting down Leutnant Lothar von Richthofen, the younger
brother of Baron Manfred von Richthofen, the ‘Red Baron’, of Jasta 11.
Captain Ball fell on the enemy side of the lines and was buried with full
military honours by the Germans.

Edward ‘Mick’ Mannock of the Royal Flying Corps, shoots down a balloon
to claim his first aerial victory.

A flying boat of the Royal Naval Air Service (RNAS) destroys the first
hostile submarine to be sunk by an aircraft without any form of assistance.
A ‘Large America’ flying boat flown by Flight Sub-Lieutenant C.R. Morrish,
Royal Naval Air Service, on a ‘Spider Web’ patrol from Felixstowe sighted
and attacked the German submarine UC36 on the surface near the North Hinder
Light Ship. Destruction of the submarine was confirmed in January 1919.

German Air Corps mounts its first large-scale daylight raid on Britain.
23 Gotha bombers of Kagohl 3 are despatched to attack London, but two
are forced to turn back over the North Sea due to mechanical difficulties.
Poor weather forced the attacking force to turn away from the capital
and seek targets further south.

The main attack is carried out against the Channel port of Folkestone
and the nearby Army camp at Shorncliffe. 95 deaths and 195 other casualties
result from the raid, mostly in the Folkestone area. While returning from
the raid, the Gothas are engaged near the Belgian coast by nine Sopwith
Pups of No.4 and No.9 Squadrons, Royal Naval Air Service, based at Dunkirk
and one Gotha bomber is shot down.

Four German Jagdstaffeln are combined to form Jagdgeschwader 1 under the
command of Baron Manfred von Richthofen. Von Richthofen’s ‘circus’ brought
together many of Germany’s finest fighter pilots and forced the Allies
to concentrate their best squadrons opposite whichever sector the Jagdgeschwader
occupied.

Victoria Cross is awarded to Captain W.A. ‘Billy’ Bishop of No.60 Squadron,
a Canadian serving in the Royal Flying Corps, for his one-man raid on
Estourmel airfield near Cambrai in France in a Nieuport (B1566).

The first heavy daylight raid on London takes place when eighteen Gotha
bombers of the German Army Air Corps attack the capital, causing 588 casualties,
including 162 deaths. Although a number of interceptions were made, no
enemy aircraft were shot down by defending fighters.

In light of the German air raids on Britain, a Cabinet Committee is set
up to consider air organisation and air defence. Although nominally under
the chairmanship of the Prime Minister, David Lloyd George, in practice
the Committee consisted solely of Lieutenant General Jan C. Smuts.

The Smuts Committee releases an interim report examining the air defence
of the United Kingdom. Amongst the Committee’s recommendations are the
establishment of a London Air Defence Area to encompass all of the United
Kingdom within Gotha bomber range and the acceleration of plans to form
additional day-fighter squadrons for home defence.

A Sopwith Pup piloted by Squadron Leader E.H. Dunning, becomes the first
aircraft to land on a ship at sea. The aircraft successfully lands on
the aircraft carrier HMS Furious, but Dunning is killed two days later
while attempting a similar landing.

Canadian fighter ace William Avery Bishop is awarded the Victoria Cross for his
conduct during a raid on a German airfield. 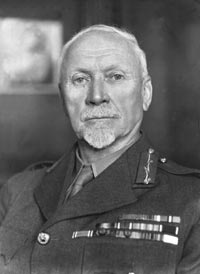 The Cabinet Committee Report on Air Organisation (the Smuts Report) is
presented to the War Cabinet. It recommends the creation of an Air Ministry
“to control and administer all matters in connection with air warfare
of every kind and that the new ministry should proceed to work out the
arrangements for the amalgamation of the two [Air] services and for the
legal constitution and discipline of the new Service”.

The Report states “the day may not be far off when aerial operations
with their devastation of enemy lands and destruction of industrial and
populous centres on a vast scale may become the principal operations of
war, to which the older forms of military and naval operations may become
secondary and subordinate”. The Smuts Report lays foundations for
the creation of the Royal Air Force.

The last daylight raid on Britain of the First World War is focused on
the coastal port of Ramsgate. Several Gotha bombers are lost, with three
shot down, one by Flight Sub-Lieutenant J.Drake of the Royal Naval Air
Service, and two others by anti-aircraft gunfire.

A ‘Balloon Apron’ is installed around London and separate zones are established
within which anti-aircraft guns and aircraft are to operate.

Home-based single-seat scout aircraft operate at night for the first time,
when three Sopwith Camels of No.44 Squadron fly patrols against Gotha
bombers attacking Chatham. Although no interceptions are made, the sorties
proved that single-seat fighters could operate safely at night.

A Royal Naval Air Service Airco (de Havilland) DH4 is forced to ditch
in the North Sea following an unsuccessful attempt to shoot down Zeppelin
LZ 93 (L44). The airship is eventually brought down by anti-aircraft fire
over France on 20 October. 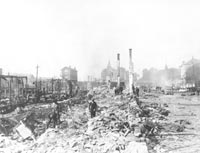 General Officer Commanding of the Royal Flying Corps in France is informed
that enemy raids on England are interrupting munitions production and
is tasked to undertake immediate action against German objectives that
could be reached from Nancy.

In response, the 41st Wing is formed to undertake independent bombing
operations against targets inside Germany.

The 41st Wing of the Royal Flying Corps is formed at Ainville-sur-Madon
under the command of Lieutenant Colonel C.L.N. Newall, with the task of
bombing industrial targets in Germany. The Wing is equipped with Royal
Aircraft Factory FE2bs, de Havilland DH4s and Handley Page 0/400s.

The Air Force (Constitution) Bill, 1917, is submitted to Parliament.

November
Following the disastrous defeat suffered by the Italian Army at Caporetto
in October 1917, two British Divisions are despatched to Italy to assist
the Italians. This force is supported by VII Brigade of the Royal Flying
Corps, (14th and 51st Wings), consisting of No.34 and No.42 Squadrons
(Royal Aircraft Factory RE8s) and Nos. 28, 45 and 66 Squadrons (Sopwith
Camels).

Royal Flying Corps attacks on the main ammunition dump and railhead of
the Turkish 8th Army at El Tine in Gaza causes widespread panic amongst
the Turkish troops. Their German commander, Von Kressenstein, said, “This
did more to break the heart of the 8th Army and to diminish its fighting
strength than all the hard fighting that had gone before.”

The first operational sorties are flown by the Royal Flying Corps in Italy.
Royal Aircraft Factory RE8s from No.34 Squadron undertake a photographic
reconnaissance of the Montello front, escorted by the Sopwith Camels of
No.28 Squadron.

The United States of America declares war on Austria-Hungary.